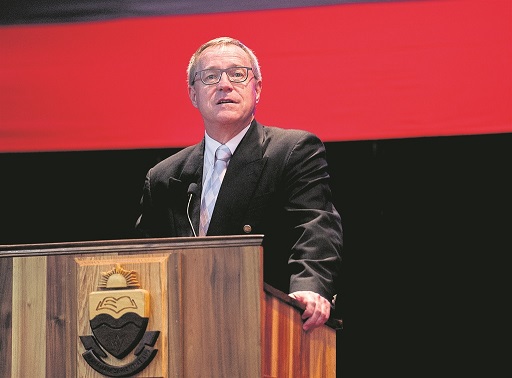 SA: ARE WE THE NEXT ZIMBABWE?

“I feel responsible for decisions made based on my recommendations”, said Mr Dawie Roodt, who earned the title as Economist of the Year (2015) last month.

During the competition that commenced mid-2015, Roodt was spot on with inflation predictions, and closest with his exchange rate and gold price predictions.


With mainly private individuals as clients, Roodt, who is currently the Chief Economist for The Efficient Group, beliefs that the JSE has wonderful opportunities, with some shares across all sectors offering very good value.


Homework is key to identifying a quality share in a specific sector that will give you the desired returns, and Roodt suggests to rather look into shares that are involved in International business dealings. Technical analysis still has value, but fundamentals are the big game changer. “There are so many variables that change on a daily basis”.


He simplifies analysis by comparing it to rainfall patterns. There are no physical indications that it will rain today, and historically, or technically, it will not rain in Pretoria during the winter months (medium term). Over the longer term, the next 10 years, the chances for rain are good.


Roodt feels strongly that the current ANC government is negatively influencing the economy. Should the majority vote be won by another party in the upcoming Municipal elections, the possibility of economic changes will be dependent on who wins, and by what margin. Recovery is another matter. “If we are lucky, the rand may recover to R14 against the US Dollar”, but even he admits that he does not know everything.


“The Gupta’s cannot be blamed for their part in further downing the economy. If they did not see this opportunity, someone else would have”, says Roodt, who describes their undue influence simply as a sign of a corrupt government that allowed manipulation.


Even though he does not see us as the next Zimbabwe, we are facing our own challenges.


Mining contributes to between 7 and 8 percent of the South African economy, and further decline in production might lead to further job losses, amongst other things. Roodt explains that if 7 percent of the economy declined by a mere 10 percent, it will have a negative impact of 1 percent on our overall economy. It might not sound like much, but it is.

With Eskom and load shedding still fresh in our minds and pockets, national draught and water supply problems have become a big concern. It will not only influence food prices, but also have a further impact on the exchange rate and on job creation.

International events, such as Brexit, can potentially have a big impact on South African markets, and Roodt is not willing to make any predictions at this stage on the effect of the USA elections on South Africa. What we do know is that should Donald Trump gets his way, it is very possible that we will welcome Samuel L Jackson into our midst, while watching a wall being built around Mexico.